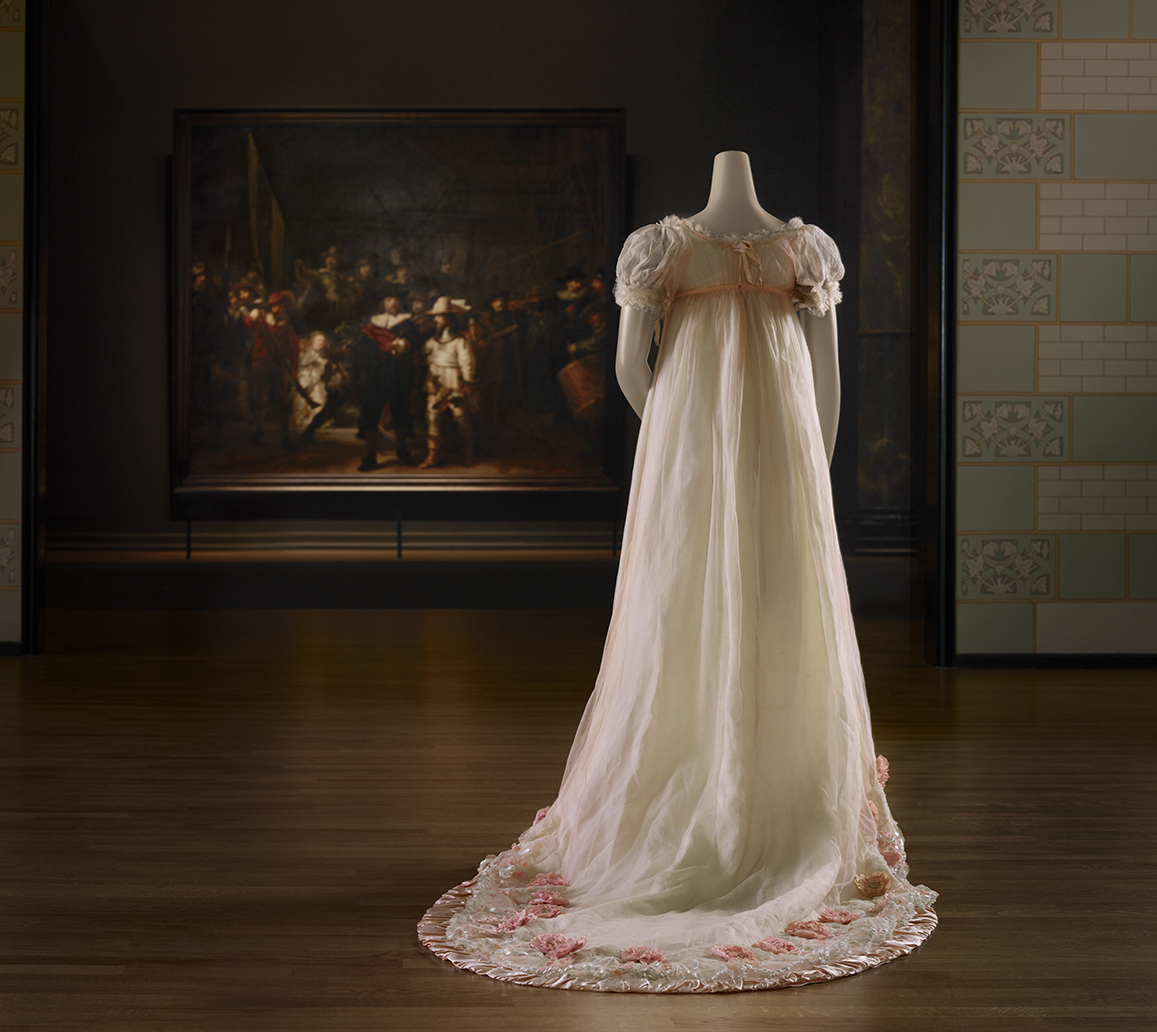 I am very proud to present a new contributing writer today. Lea Zeitman is one of our blogger friends from Switzerland and she writes a beautiful lifestyle blog herself. She is one of the reasons MuseumLifestyle exists today and we’re therefore really happy that she wrote an article for us after visiting the actual exhibition at Rijksmuseum Amsterdam which is a feast for fashion lovers.


For the first time the Rijksmuseum presents a large selection of its diverse fashion collection from 1625 to 1960 in an exhibition designed by world-renowned Dutch photographer Erwin Olaf.
Starting with garments worn by members of the Frisian branch of the house of Nassau in the Golden Age, the exhibition will feature vibrantly coloured French silk gowns and luxurious velvet gentlemen’s suits of the eighteenth century, classically-inspired Empire dresses and twentieth-century French haute couture by Dior and Yves Saint Laurent.
Rijksmuseum Curator of Costumes Bianca du Mortier explains, The garments presented in this exhibition reflect the stories of the people who wore them. In fashion, the choices of the wearer count – they make him or her a trendsetter or a follower. Even today the clothes of the very rich and powerful always convey a conscious or unconscious message. In that respect, nothing has changed over the last 330 years. These choices are restricted by such factors as budget, opportunity, age, social status, climate, personal likes and dislikes and so forth. And when presented in a museum, there is a final selection: the selection of the Rijksmuseum.

„In this exhibition there is so much to see in the costumes, but some details do not immediately strike the eye. this is why additional attention is devoted to them in this sheet – an invitation to take a closer look“   thats what is written on the hand-out of the CATWALK exhibition and as I did not find a digital version of this mentioned sheet, I am going to quickly summarize it.
So when you walk into the first room you will see a gorgeous women costume in the middle surrounded by wonderfully detailed kids costumes. pay attention to the costume that is projected to the wall behind. there you can see a black jacket and now here comes the additional information from the sheet:   SOUTACHE  This jacket is trimmed with soutache, an ornamental braid found on hungarian uniforms that became fashionable in the 19th century. The conical trim derives from upholstery.   Right next to the projected Soutache jacket there is the door entering the next room that gives the exhibition its name: CATWALK. A beautiful installation of moving dresses that form a catwalk with a front row all around it.

Did I already tell you that I was allowed to take photos and videos with my phone. I was so very happy to hear that and I was so surprised to see what an awesome website the Rijks Museum has. Besides offering lots of information about the exhibition, there is an option to download photos and a very funny page called RIJKSSTUDIO – make your own masterpice – where I was able to like and cut out pieces of their photos and arrange them in a set, thats not all, you can share your sets with the world and can be very creative by creating your own things with help of the photos. Have a look for yourself! 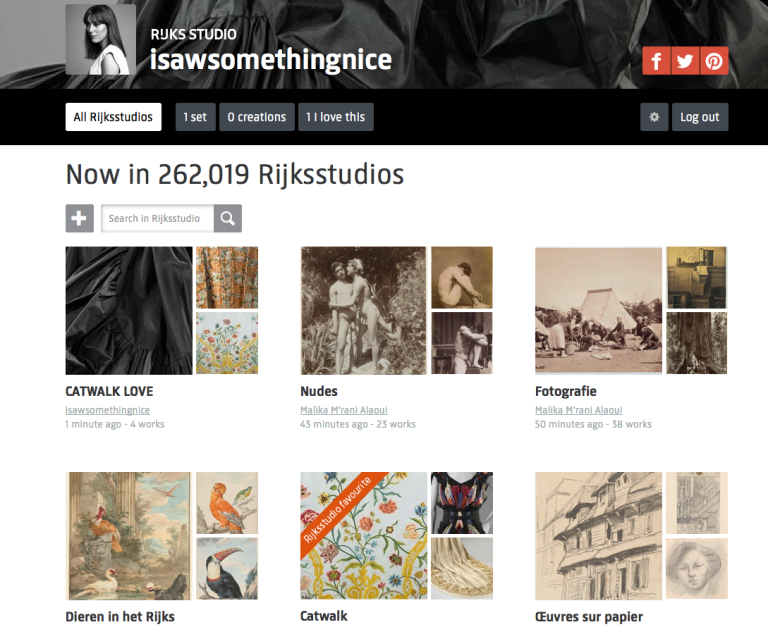 I absolutely fell in love with these two costumes that I am about to show you now. They are so timeless and elegant and can easily be worn nowadays. The first one is a hip length coat of burgundy ribbed silk, with a tailored peplum, that is part of an ensemble and a black cocktailjapon.

Ms. Stack Field, 1948 | (c) Rijksmuseum
And now I wanna get back to the hand out with the extra information about certain costumes that have hidden details and want to show you two examples, one is a corsage of bright pink roses and grapes (Maison Yteb, ca. 1918 – ca. 1920). And probably the most stunning dress of the collection due to its width: the MANTUA dress wih train that was worn by the 22 year old Helena Slicher when she married Baron Aelbrecht van Slingelandt on 4 September 1759.

Along with silk velvet flowers this corsage is adorned a bunch of 67 grapes. these are made of little hollow glass balls coloured with paste.

In case you wonder what a Mantua is, here is some info that I have found via wikipedia:

A mantua (from the French manteuil or “mantle”) is an article of women’s clothing worn in the late 17th century and 18th century. Originally a loose gown, the later mantua was an overgown or robe typically worn over stays, stomacher and a co-ordinating petticoat.
– ladies at the english court wore mantuas with „tail“.

This one also has a train, which was made later, perhaps on the occasion of the marriage of Princess Carolina of Orange Nassau.   - spanning more than two metres, this is the widest dress in the Netherlands! You had to go through a door side-ways. Back then fabric was woven only in a width of 58 centimetres, which means that this skirt required eight lenghts.   - here at the side you can see that one of the flowers is missing a section of petal. Was the dress finished in haste, or was this last tiny piece simply overlooked?    - yellow embroidery resembles gold. Highborn brides often wore real gilt and silvered material. However this was probably not appropriate for Helena, for she was not noble, but came from an affluent patrician family.   - the side seams on the back are actually fastened pleats. Seamstresses had to fold straight lengths of fabric into the desired model because they were not allowed to cut patterns. This was reserved for (male) tailors.   - By 1759 the embroidery on this dress was considered old-fashioned: the floral decoration looks early 18th century! However the sleeve with three ruffles was all the rage then.   - Hoops were worn under a skirt to give it volume. Because you could rest your elbows on them they were called paniers à coudes (elbow paniers).  - Marrying in white was not yet customary in the 18th century; this only became fashionable a century later. Brides often wore light colors, such as yellow, pink, pr- in this case – pale blue.   - Although the embroidery on this skirt looks symmetrical, upon closer inspection many differences can be discovered. For instance, a little crown can be seen on the winding yellow border to the right of the tail, but not on the left.
I can highly recommend to visit the Rijksmuseum in Amsterdam as I really loved the showed costumes. 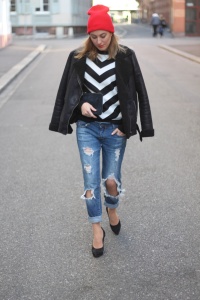 Lea Zeitman is a Freelance wardrobestylist with a BA in Post-Industrial Design and works part time at the costume department of THEATER BASEL.

If you like to see more of our stylish friend from Switzerland, check out her beautiful blog!