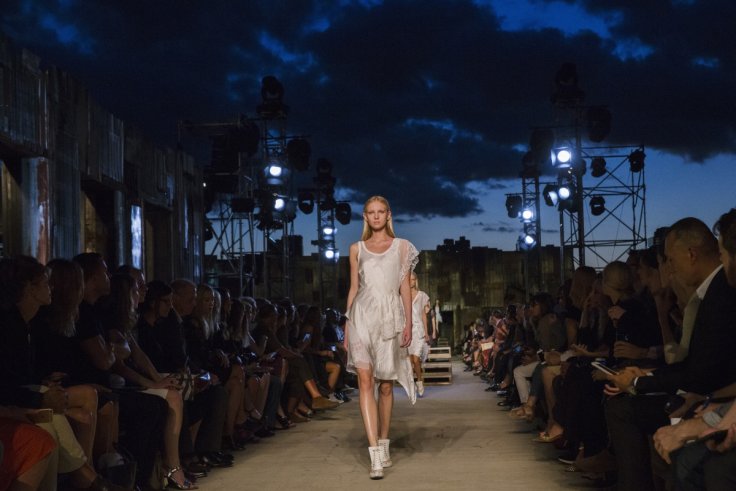 Last week I promised you my favorites from New York Fashion Week so here they come. Actually this post is about one outstanding fashion show which had such a high relation between fashion and art that I just couldn’t come around it. It was a vibrant collaboration between Givenchy’s head designer Riccardo Tisci and performance art legend Marina Abramovic. The fashion was of course designed by Tisci but Abramovic did the art direction of the show. That’s something pretty outstanding and suited the show just great. The event was special for several more reasons. It was the first time the French fashion house showed a new collection in New York instead of Paris, it marked 10 years of Tisci at Givenchy, the show was held at September 11 what is a critical date for any event in New York and it had to celebrate the new Givenchy flag ship store at Madison Avenue at New York’s Upper East Side. All together that’s something but the buzz grew exponentially when the brand announced that the show’s audience would include over a thousand “real people” — 820 tickets were given away to the public via this site, including 280 tickets for local fashion students and 100 for locals — plus top fashion editors and other fashion people who would normally gain entrée anyway.
Because the show was set at September 11 Tisci dedicated its theme to love and family. Also the show was meant to make a connection between different cultures. So no wonder you could identify influences from all over the world like the very delicate face jewelry some of the models wore which reminded me of India. Also the music Abramovic chose for the show was quite exotic. The solemn soundtrack of hymns and prayers that accompanied the show spanned six different cultures and religions. Before the show started there were also different performances shown which were inspired by Abramovic’ older works. You get a very good overview about those in the documentary “The Artist is Present”. The movie directed by Matthew Akers about Abramović’s retrospective at the Museum of Modern Art also featured a scene of the artist with Tisci at the label’s haute couture offices in Paris.
There was a lot to take in for fashion fans, as well: A little over an hour after the scheduled show time, Tisci’s collection debuted with Mariacarla Boscono taking the first pass. And they presented not just Haute Couture but also ready-to-wear and men’s fashion. That’s an interesting choice and makes me excited if it will change the way fashion is presented. But it may also be just in celebration of the new store where you can exclusively buy Givenchy Denim in the future. I defiantly will check that out when I am in New York next spring 😉 Hopefully the jeans will be affordable.